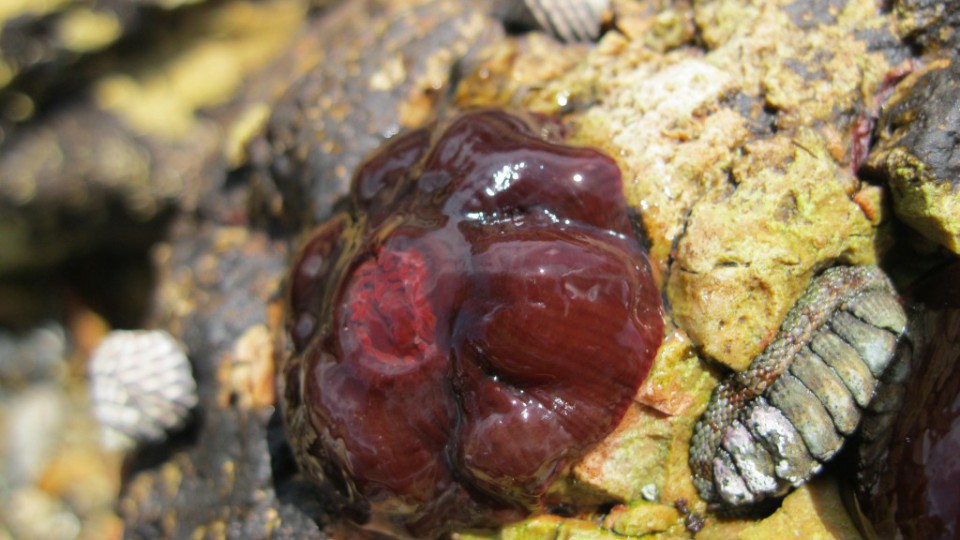 By Lachlan:
Yesterday, when I arrived at Bar Beach, it was raining and surf was rough and choppy. Not ideal conditions for snorkelling. Luke, the guide from National Parks and Wildlife, told the group that we would have to walk along a rock ledge to a more sheltered location. After being kitted out with snorkels, flippers, wetsuits and masks, we wandered along the ledge to the spot, picked out by Luke. I admit, I did not have bright hopes for this adventure, because the area appeared to be barren and desolate of life. However, once I got in the water, it was a completely different story. Schools of small fish were just drifting on the edge of the current, waiting for the tide to push smaller prey towards them. The sea bed was littered large rocks, on which oysters, Neptune’s necklace and ascidians (sea squirts) thrived. There was everything from sting rays to octopi, peering out from the gloom. I was astonished that there was such a large variety of wildlife, in what appeared to be just another strip of water. The two hours seemed to fly by, save for the pain in my feet from the too small flippers. Soon it was time again, to brave the rock ledge and head back to the cars. Luke had been surveying the particular strip of water that we snorkelled in for the University of NSW, because it is one of the most diverse parts of water in the Far South Coast. His job was to come once a week to check the strip and count and record the species and diversity of wildlife that lived there. It was a fantastic experience, well run and I would definitely go again. Sadly, I didn’t have an underwater camera, but this is a picture of a waratah anemone and some chitons from a rock pool in Eden.