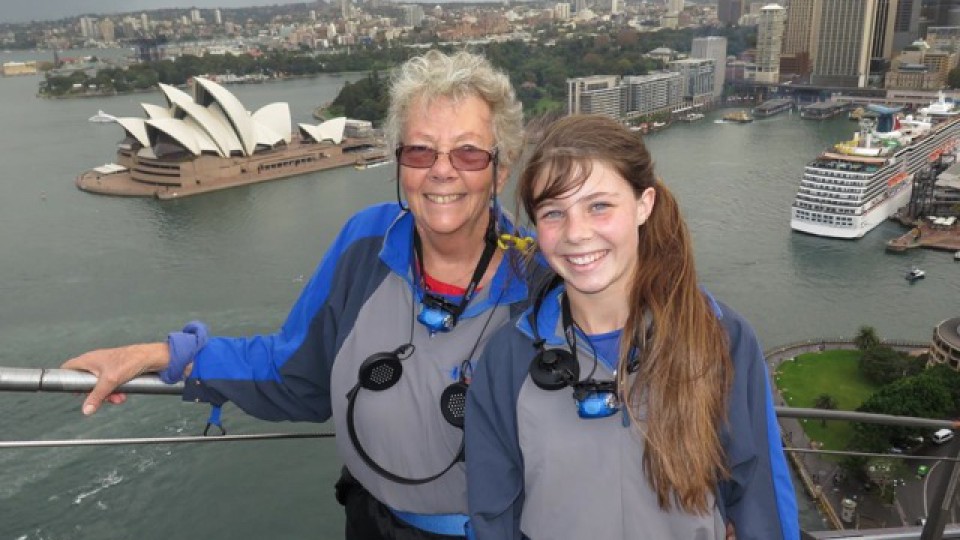 By Jade:
On 11th April, after a short flight to Sydney, my Nana and I spent three days visiting the Powerhouse Museum, Sydney Aquarium, Maritime Museum, Wildlife Sydney Zoo and Harbour Bridge.

Day 1
Powerhouse Museum
At the Powerhouse Museum we looked at numerous exhibits, with the majority of scientific displays being interactive. We experimented with temperature, pressure, electricity, magnetism, light, gravity, motion and chemistry. As well as the interactive experiments, we wandered around the engineering, technology, fashion, nuclear, cyber, music, space, gaming, designing, transport and ecological exhibits. After this, we made our way to the newly introduced “Oopsatoreum” where we were enlightened with fictional stories detailing the reasons why the displayed inventions were not a success. This was my favourite part of the museum, as the fictional stories were rather amusing.

Day 2
Sydney Aquarium
The next morning we headed off to the Sydney Aquarium, where we made our way through the different enclosures that housed the beautiful aquatic life. We watched as the sharks swam over us in the underwater tunnel labeled as “Shark Valley”, one of the 14 themes displayed in the aquarium. Other themes included The Bay Of Rays, Discovery Rock Pool, Mangrove Swamp, South Coast Shipwreck, Dugong Island and Shark Walk. Watching the stingrays playing on the surface of the water was entertaining and the facts placed around the aquarium were very interesting.

Maritime Museum
After a short break for lunch, we ventured to the Maritime Museum, which was holding a temporary display of life size whale photography. We explored the museum, looking at the many different exhibits including the First Fleet and Navy, along with the history of swimwear, surfing and beach toys from the 1930’s. My favourite display was the photography, as the images were incredible and the photographer’s documented experiences whilst capturing these were amazing.

Harbour Bridge Climb
After a long walk, we arrived at “BridgeClimb” where we were given an orientation briefing and demonstration. After this, my Nana and I, along with our guide and approximately 14 others, headed out to the southeast pylon of the bridge, where we would begin our journey up the 134m high steel arch that crosses Port Jackson. Along the way our guide, Tom, provided us with lots of information about the construction and maintenance of the bridge such as the fact that the incredible structure consists of 6 million hand-driven rivets and takes 10 years to paint. He also included the remarkable stories behind the 16 people that lost their lives during the construction of the bridge. It was also fascinating learning about the large hinges located at the base of the bridge that accommodate for the 18cm expansions and contractions of the steel due to temperature changes.

On our ascent, the weather played nice allowing us a spectacular view of the Opera House and eastern side of the city, however, when we reached the summit this was definitely not the case. The wind and rain began but the experience was just as amazing.

Day 3
Wildlife Sydney Zoo
Before beginning the long train and bus trip home, we visited the Wildlife Sydney Zoo. We made our way through the many “habitats” featuring various Australian animals from the iconic kangaroos and koalas to nocturnal creatures. The saltwater crocodile, visible at eye level through a wall of glass was my favourite. He swam extremely close to the glass giving us an amazing view of his jaw and teeth before pushing off the glass by putting his surprisingly large claw directly in front of me.

The entire weekend was an amazing experience and won’t be forgotten!